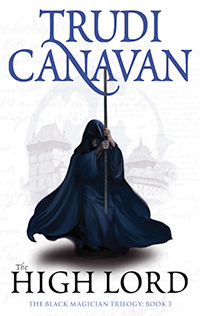 Book 3 of the Black Magician Trilogy

‘Why are you showing me these books?’ Akkarin’s eyes bored into her own, and she looked away. ‘You want to know the truth,’ he said. He was right. Part of her wanted to ignore the books. But she did want to know.

In the city of Imardin, where magic and power walk hand-in-hand, a young street-girl, adopted by the Magicians’ Guild, finds herself at the centre of a terrible plot.

Sonea has learned much at the Magicians’ Guild and and the other novices now treat her with a grudging respect. But she cannot forget what she witnessed in the High Lord Akkarin’s underground chamber – or his warning that the realm’s ancient enemy is watching the Guild closely.

Her old friend Cery now has an influential position among the Thieves, and good connections in high and low places. When an exotic stranger offers to help him with a secret task, Cery know he should refuse, but then…

As Akkarin reveals more of his knowledge, Sonea does not know who to believe, or what she most fears. Could the truth really be as terrifying as the High Lord claims? Does an ancient power threaten them all? Or is he trying to trick her into assisting him with his dark schemes?