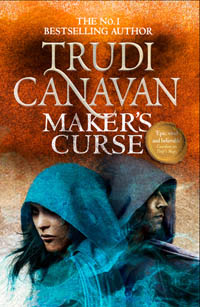 Book 4 of the Millennium’s Rule Series

Rielle the Maker. Saver of dead worlds. So she has been for five cycles since the confrontation with Dahli. But when Baluka sends her to help a world not dead, just competing with its neighbour, her determination to stay away from political conflict is tested. And her next visit to her own world, to check on Qall, is fast drawing close. After five cycles in exile, is he ready to return to the worlds?

Tyen has cast off his old identity. No longer a spy, but a teacher, his determination to run a school of magic and find ways to destroy all war-machines have been thwarted by interference from Liftre. Then a chance to amend past wrongs also brings a possible solution, and a reason to return to his home world.

Until an old enemy brings news of something worse than Restorer manipulations and corruption within Liftre, and not even the most powerful sorcerers can stop it.