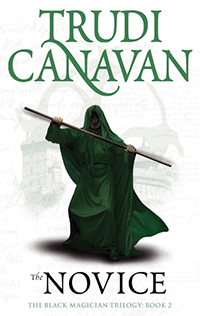 Book 2 of the Black Magician Trilogy

‘The most important attribute of a magician is knowledge. Without it his strength is useless.’ The magician’s eyes flickered to Sonea, ‘Even if his powers surface of their own accord, he will soon be dead if he does not gain the knowledge of how to control them.’

Sonea knows the other novices in the Magicians’ Guild all come from powerful families, but she also knows she can turn to Rothen and Dannyl for help when she needs it. That is, until somone starts spreading malicious rumours about her — and Akkarin, The High Lord, steps in. Promoted to Guild Ambassador, Lord Dannyl leaves for the Elyne court. His first order from Administrator Lorlen is to resume, in secret, High Lord Akkarin’s long-abandoned research into ancient magical knowledge. Not knowing the true reason for his journey, Dannyl is soon facing unexpected dangers. Meanwhile, Sonea has almost forgotten the High Lord’s dark secret, but keeping the truth hidden may be a grave mistake.