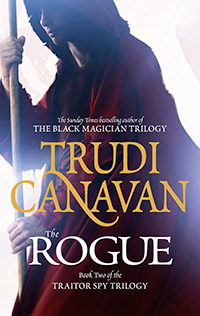 Book 2 of the Traitor Spy Trilogy

The Rogue is the second volume of the Traitor Spy Trilogy, which takes up the action a generation after the events in The High Lord.

Living among the Sachakan rebels, Lorkin does his best to learn about them and their unique magic. But the Traitors are reluctant to trade their knowledge for the Healing they so desperately want, and while he assumes they fear revealing their existence to the world, there are hints they have bigger plans.

Sonea searches for the rogue, knowing that Cery cannot avoid assassination forever, but the rogue’s influence over the city’s underworld is far greater than she feared. His only weakness is the loss of his mother, now locked away in the Lookout.

In Sachaka, Dannyl has lost the respect of the Sachakan elite for letting Lorkin join the Traitors. The Ashaki’s attention has shifted, instead, to the new Elyne Ambassador, a man Dannyl knows all too well.

And in the University, two female novices are about to remind the Guild that sometimes their greatest enemy is found within.