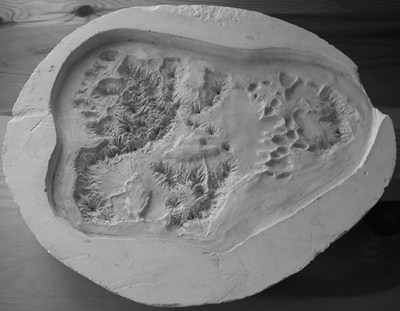 When I first created the land of Ithania, I attempted to make the geography more realistic by pushing around slabs of clay as if mimicking the movement of a planet’s surface. I squished these ‘plates’ together and pinched the ridge that formed where their edges met into little mountains. Then I dribbled water down the sides of these ‘ranges’ and pressed grooves into the clay where these ‘rivers’ ran. I tweaked my map here and there, because I had a rough idea where I wanted some features to be. Then, when I was satisfied with what I had, I made a plaster mould because I’d probably trapped plenty of air bubbles between the layers, and it was likely to explode if I had it fired. 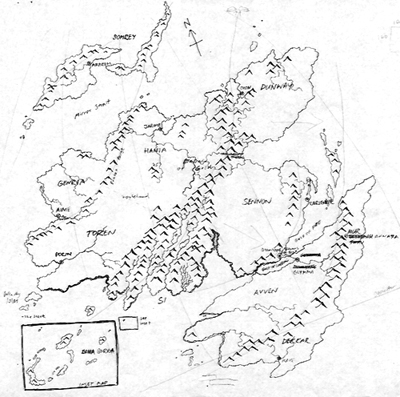 When I started to write the Age of the Five trilogy, I refined the map further. A southern continent was added, and I decided on country boundaries and added more cities.

When the time came to prepare a finished map for my publishers, the knowledge and experience I’ve gained from years of doing such work for a living told me that I’d never get all the fine detail of two continents to fit into a paperback-sized double page spread. I also wanted to make it look more like a map of the classical era. On the advise of Russell Kirkpatrick, the New Zealand fantasy writer and cartography expert, I looked for an example of a “Ptolemy map”. None of Ptolemy’s maps survive, so I was looking at recreations from the Renaissance, but if I took out the decorative elements and considered the shape of the lands mapped, there was an interesting sense of distorted scale in them. After tweaking my map some more, I added character illustrations for fun (and to fill out the space at the sides) and it was ready for publication. 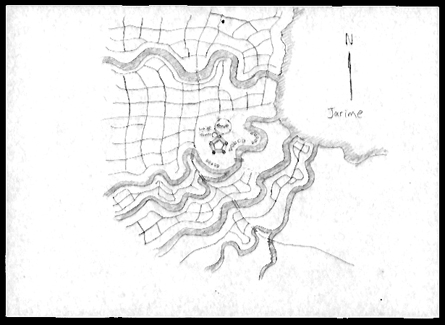 I drew this to help me describe movement around the city of Jarime. I liked the idea of a city built around a river delta, with the winding rivers isolating parts of the metropolis and punts or ferries adding to the local means of transportation. 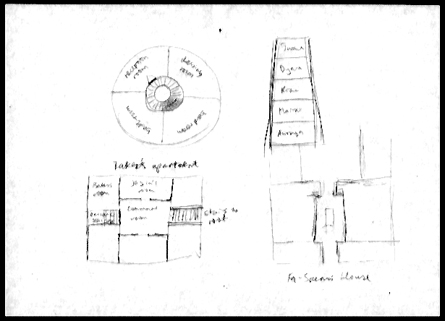 These are rough working sketches drawn to help me describe the movement of characters within different settings. I hinted at classical era architecture by having an open atrium and pool at the centre of city buildings. The White Tower, on the other hand, was to feel like something outside of our history or Ithania’s – something completely new and different, and perhaps a little impossible. 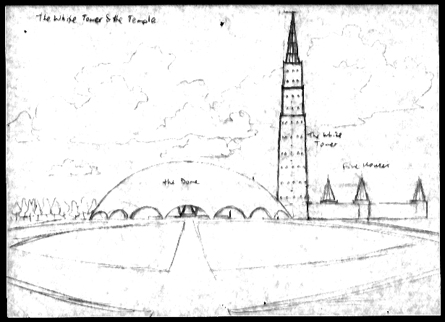 A sketch of the Temple grounds, with the Dome at the centre, the White Tower at its right, and the Five Houses – accommodation for the priesthood – at the far right. All of these sketches are in pencil on slightly creamy paper, which made the scanning of them problematic. 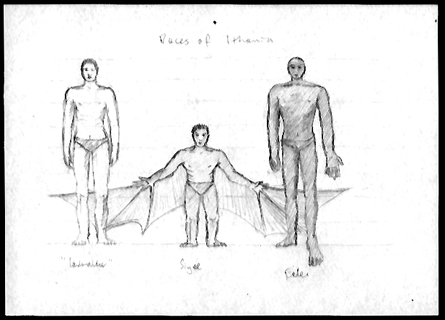 A sketch I did in order to illustrate the physical differences between ordinary humans, the Siyee and Elai. I wanted the Siyee to be small, yet swarthy, and I imagine the Elai as a completely hairless, dark skinned Ian Thorpe with webbed hands and feet! 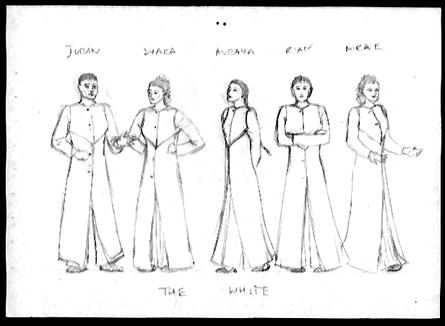 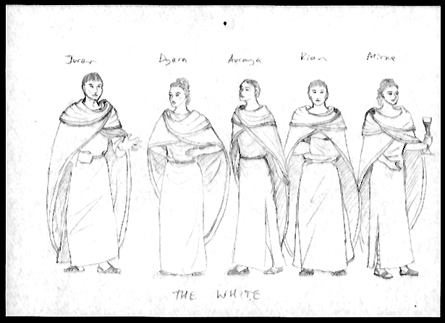 At first I imagined the White wearing rigid, regal coats. Though I’d set the story in a society with a classical era level of technology, I didn’t want to make anything look specifically Roman or Greek. But these coats were too modern, so eventually I came up with the idea of the ‘circ’, a simple circle of cloth a bit like a toga, but only worn by the priesthood. 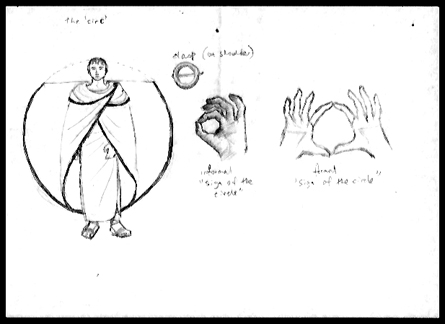 At the left is a diagram of the circ, drawn mostly in order to explain it to cover artists. I don’t think the cover artists were at all impressed, as none of them painted a garment that looked anything like it. The circular item is a clasp.

The bad sketches of hands were to show the two versions of the “sign of the circle” used as a ritual guesture of respect by Circlians, the two-handed one being more formal than the one-handed version. 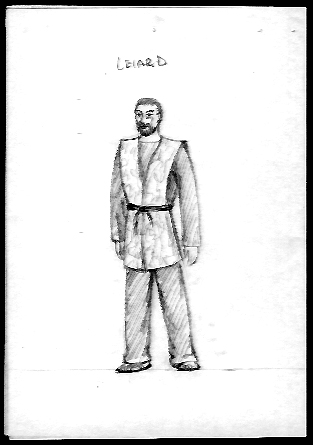 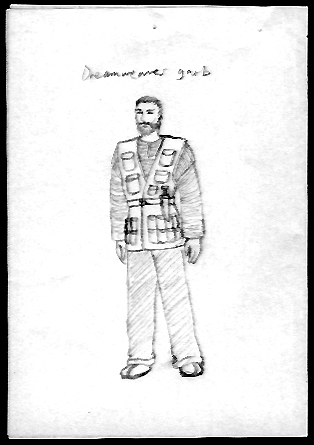 As with the White’s garments, I reconsidered the Dreamweaver manner of dress as well. Initially I described them wearing robes, but I wanted their garb to be practical so the robes became a vest. Later it bothered me that what I’d drawn looked too much like the novice robes from the Black Magician Trilogy. I also wanted Leiard to have a more rugged, wiry, man-of-the-land kind of look. A look that was attractive to women, but also set him apart from the fashionable, rich people Auraya would normally associate with. So I made the vest something like a hunter’s vest, but the pockets were for cures and healing tools.

A sword was never meant to be part of the Dreamweaver kit, however. I did point out to the US publishers that Dreamweavers are pacifists and would never be seen brandishing a sword like on the US edition of Last of the Wilds, but at the time fantasy book covers were still stuck in the 1970s and I couldn't persuade them to change it.